With each tasting of a Southern Tier beer I have, there is one thing I have come to rely on with this brewing company, they will do something to push the envelop with their beer that works extremely well.  When I saw the Southern Tier Iniquity Imperial Black Ale on the shelf for the first time I didn’t hesitate to buy a couple bottles.  I love to try different and unique styles of beer and that is exactly what Southern Tier has been producing. 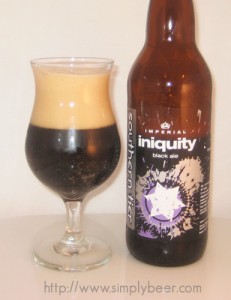 This beer pours a thick head on a conservative pour (Glass at a 45 deg angle) which quickly bubbled up to a inch and a half think head.

Has the look of a porter with dark mahogany hues and a milky thick amber head.  There is a strong head retention and fairly decent lacing.

This is a bold beer; from 18 inches away I can smell chocolate and a floral hop aroma.  The aroma profile is very much a cross between a stout and IPA, which is very appealing and unique.  On closer examination (nose in glass) there are notes of alcohol, mild fruity esters, and yeast.

This beer has a very strong malty chocolate upfront feel.  This transitions into a dark plum like flavor that is quickly diluted with effervescence as it rolls through your mouth.  The Iniquity finishes with a hop bitterness that is very noticeable, but well balanced with the lingering chocolate flavor.

Another great Southern Tier beer,  even though this beer is 9% ABV, it is hard to find any alcohol past the aroma.  An incredibly easy drinking beer, well balanced between the chocolate, malt, alcohol, and hops.  The Southern Tier Iniquity leaves you wanting more.  The only downside of this beer is the sweetness; it tends to build up in your mouth while drinking the 22oz bottle.

I’m not sure I would attempt to classify this beer; the appearance is that of a porter, the aroma is more IPA/Russian Imperial Stout, and the taste brings so many flavors that reminds me of an American Double or Imperial Stout.

This is a desert beer, high in ABV with strong chocolate flavors, this would go well with sweet chocolate deserts.

While Southern Tier does not list caloric info, the 9% ABV of this beer would put the calories at approximately 275-300 calories per 12oz serving.