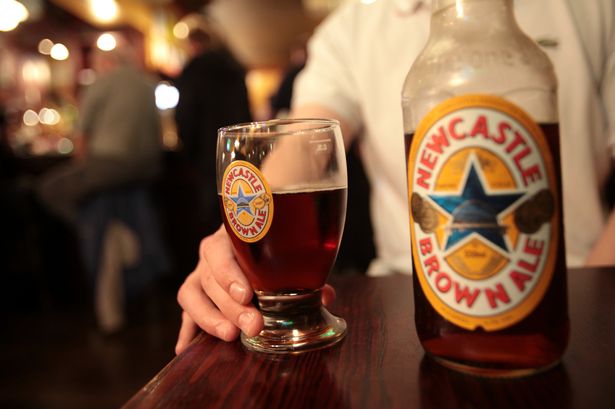 Nicknamed the “never bitter beer,” Newcastle Brown Ale is a signature brew of the Newcastle Brewery. First brewed in 1927 after three years of development, it began winning awards at the 1928 International Brewers’ Exhibition in London. Newcastle Brown has been in production continuously ever since, even through the material shortages and restrictions of World War II.

The beer pours something between a very dark amber and a light brown, with a slightly reddish tint to it, and a relatively thin, light tan head. The head is made up of tiny bubbles and disappears quickly, but left a lacy tracing on the glass. The body was clear and sediment free.

Newcastle has a mild aroma, slightly nutty and with a definite caramel. The malt aroma is not as pronounced as might be expected in a dark beer. The flavor is also fairly mild, not very malty, and beginning with a hint of caramel sweetness. The beer is well-balanced; the hops are not overpowering but are definitely there, just enough to cut the sweet.

All in all, Newcastle Brown Ale is a nicely drinkable beer, and I think I found a new “go to”  brew. It finds the middle ground between a watery texture and the heavy, syrupy mouth-feel of many stouts. There does seem to be a decided difference between the flavor of the draft and the bottled versions of this beer, with the draft beer coming out ahead. This is possibly because it’s bottled in clear bottles, rather than the usual green or brown, which better protect beer from light.

Newcastle is best served in a traditional pint glass or mug. The flavors will be more pronounced if it is served slightly warmer than the 40 degrees that American beer-drinkers are accustomed to.

Although it’s sweeter than many beers, Newcastle is also flavorful enough to pair well with intensely flavored foods such as pizza or grilled meats. It works well served with meat prepared with sweet, tangy bar-b-que sauces. It would also go well with earthy or nutty cheeses, such as Camembert, Asiago, or Colby.

Ranked on a scale from 1 to 5, Newcastle scores a 4 overall. It is available year round, and is generally easy to find.