What I have found from drinking Dogfish Head, you’ll always get something that is going to push the envelope or at least hit you with a curve ball. The Dogfish Head Immort Ale is considered an American Double, which is basically a high ABV beer catchall category, when a beer doesn’t fit anywhere else.

As with all beer I pour, started off standard 45° pour, but found there wasn’t much head forming. So I turned the glass just shy of vertical and the beer opened up nicely 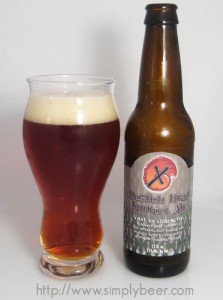 Has a beautiful mahogany cherry color, ruby hues shine through when held to the light.  When poured the beer had about an inch of head, and retained about 30% after several minutes, very impressive.  With a steady stream of bubbles rising from the bottom, I anticipate it will retain a good portion of what is left while drinking the beer.

The dominant aroma is sweet and smoky, but there are hints of vanilla hiding behind the smoke. The smoky oak aroma is bordering on the heavy side.

The taste pretty much marries up with the aroma. The intense oak smoke really sucker punches you followed by a head warming alcohol heat, interlaced with maple sweetness and hints of vanilla that come and goes throughout the mouth.   This beer reminds me of a coffee I drink occasionally, Café Du Monde Coffee and Chicory.  I think it is the chicory flavor that I taste in this beer, which is why it reminds me of that coffee.

I think this beer is a love it or hate it type of beer, because of the intense oak, alcohol, smoke, and sweetness.  I enjoyed the complex flavors and the intensity of them, but the oak was bordering on over-the-top.  At 11% ABV, I think I would limit the number of these I drank.

Need a food that matches up with the smoke in this beer, I would love this with some smoked brisket with a sweet/tangy BBQ sauce.

Glassware: Pint or Stein (I used a Modified Pint)